Weekend with the Daddy Man...

Last weekend, the boys relished in time with their Daddy.  Todd has been "on the road" an awful lot lately, causing him to leave before they wake up in the mornings, coming home after dinner or even spending the night away...
They just do not like it when our whole family is apart! Now, don't get me wrong...99% of the time, Todd is able to spend every morning, evening and weekend by their side, it has just been recently that work has pulled him in other directions. Not complaining, well, maybe just a little bit, but we all love us some Daddy time!!

Playing at the park:

And, yes, we are fully aware that poor Wade's haircut needs immediate assistance. The poor guy has had HORRIBLE haircuts for the past 8 months, because he hates it, cries the whole time and jerks his head around. We are in the "growing out" process. Do not say a word. Please.

Wearing our hats to look like Daddy...seriously, are they not mini-Todd's??

We even went over to the Hipsh's to watch a little Nascar. Well, the guys watched, the women chased the kids and we had a wonderful time together...

The boys' soaked for over 30 minutes that night. Every inch of their little bodies was covered in dirt and filth. All boy I tell ya. Got the bruised up knees to prove it!

This post just would not complete without a few snippets of conversation and a discussion of Mr. Bear.

As we are driving to Target earlier this week, Brody yells from the backseat to the car in front of me, "Go Dummy!" My heart skipped a beat...I asked my little "angel" what he just said, he repeated it loud and clear...then Wade started chanting the same phrase...both of them giggling between turns of shouting "Go Dummy!" I called Todd immediately, made him listen to what his son's have picked up while driving with him. He was silent and then we both started laughing. Gotta really watch what we say.

Wade looks up at me last night, while I was behind him on the steps heading up for bed, and says, "I love you Mommy. I make you happy and smile". I almost started crying. I grabbed him and told him that "yes, you always make me happy and smile and that I love you so very much...". he then planted a huge kiss on my smacker, then on my cheek, patted my shoulder and smiled. Oh, how I melted.

The B-man is still completely obsessed with Mr. Bear. Mr. Bear is his constant companion. We do not go anywhere without him. Todd does not like the fact that B has an item that he is so attached to, but I think it is sweet. He is not going to go off to college, bringing his bear out on dates with him. We would have a major problem at that point :) He spent an extra 5 minutes the other morning, when we pulled into the school parking lot, "giving his bear extra lovin' and makin' him feel safe Mama..."!!! I have recently begun the search for an identical Mr. Bear. Harder than you think...wish me luck, as Mr. Bear's head could fall off any day now. (Thank you Nicole for holding up Mr. Bear for me...)

I am so excited to meet you little one! I have already started going through bins and bins of Brody and Wade's baby blankets and clothes and burp cloths and bibs...and it brings back a flood of emotions as I try to imagine your arrival. Jack, you are so wanted and already extremely loved. I love to feel you move and jab and dance around my belly. You are most active between 9a-noon and then again when I lay down for the night, although you tend to adjust all day long.  You have an eager family waiting for you and you will be treasured and celebrated and admired. You are not my first son, but the next...and our last. You are the next chapter in our growing family...and you are my little one. We love you to the moon and back!!

Here are pictures from the day your big brothers were born!

Our Valentine weekend in pictures:

We started off the weekend with a party at the boys' school, where we watched the munchkins decorate cupcakes:

and where we handed out our homemade valentine jars to all of the teachers (the boys' had a BLAST making these):

Brody and Wade received their valentine gifts from Mommy and Daddy...rain boots(they have been begging for these for weeks now) and Buzz and Woody figurines:

Took a trip to the Niceville park, which actually ended in an ER trip...A child pushed poor Wade down a very big slide...he couldn't bear weight on his right leg...so off to the ER we went. Ended up with a sprained ankle that seemed to heal it self by the next afternoon??)

His last ride down the slide before the incident. (It took every once of self control for me not to yell at the child that pushed Wade):

Spent some down time at Barnes and Noble:

Said to heck with the down time and headed to the beach to chase birds:

And ordered Outback take out for dinner. This is what happens when you end up waiting for 20 minutes in the car for take out and your kiddos are bored:

Happy Valentine's Day to everybody!

Well, it seems I have been on a blogging hiatus. I just haven't felt like taking the time to be completely honest! But, there are moments passing by, that if I do not take the time to document, they will be memories scattered with the wind, completely lost for forever. Heck, I cannot even remember what I did last weekend for heavens sake!

The boys have become smarter than Todd and I. I swear. It is as though they woke up one morning as little boys...toddlerhood gone...well except the distinct smell of a diaper needing changed....gross.

They tell me to drive faster...and how to cook eggs...and to fast forward a DVD when it comes to a part that they do not like...and they take off their own clothes...and can unbuckle their car seats partially (grrrr)...

They are extremely hard to reason with at times, but incredibly loveable...they are craving independence and making their own choices. They know which activities are supposed to happen in the mornings, on school days, before nap, at bedtime...They list off their "best friends" on the way to school each morning and are quick to tell us that they "aren't gonna be my friend" if we upset them...They have favorite toys, will not wear each others jackets and demand certain color cups to drink from...

Wade brought home the class "pet" a few weekends ago...a little stuffed ducky named Daisy. Daisy came with her own blankie, a notebook to document our adventures and off we went!! We brought her with us on a playdate to Campbell and Cailey's:

She even got to spend the night with us at Nana and Gator's house and camp out on the family room floor, ride our bikes and help feed the ducks!

We are still opening Christmas presents. We were blessed with so many, that we decided to tuck some away for a rainy day...best idea ever!! This one was a huge hit...thank you Aunt Lowie and Uncle Tom!

Leave ya with a sweet shot I snuck of Wade playing Daddyman...... 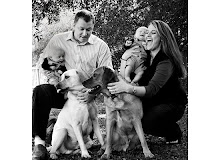